winter is coming. The situation surrounding the gas energy crisis is evolving almost daily due to fluctuations in both prices and supplies and one of the frequent questions lately is whether we will be able to replace Russian energy supplies. To understand possible future scenarios, let’s start by highlighting the distribution of natural gas in our country and the changes that have occurred in recent months.

The gas arrives in Italy via methane pipelines, as LNG, LNG, or through LNG tankers or special transport vessels. In liquid form, the gas is then fed into the network through regasification devices in Porto Levante (Rovigo), Livorno and Panigalia (La Spezia). The Italian pipeline connections consist of five gas pipelines with gas reserves of approximately 16 billion cubic meters (the second in Europe after Germany). As for the gas pipeline network, it consists of: Transmed (the gas pipeline that transports Algerian gas, passes through Tunisia and reaches Mazara del Vallo). Green Stream (the gas pipeline connecting Libya with the Gela plant in Sicily); Transitgas (the link between the Northwest European gas market and the Italian market, which transports Dutch and Norwegian gas to Gries Pass in Piedmont).

Russian and Azerbaijani supplies pass through three pipelines before reaching the Italian market. Russian gas begins its journey with the Siberian Gas Pipeline, crosses Ukraine and reaches the border with Slovakia, then takes TransGas to Austria where it is injected into TAG, Trans Austria Gas, which transports it to Tarvisio, in the county. Udine. Azerbaijani gas starts from Baku, with the South Caucasus pipeline, and reaches Turkey. From there the gas continues via TANAP, the Trans-Anatolian Pipeline, which takes it to Greece where it leaves the TAP, the Trans-Adriatic Pipeline, which lands in the Melendugno municipality in Puglia. 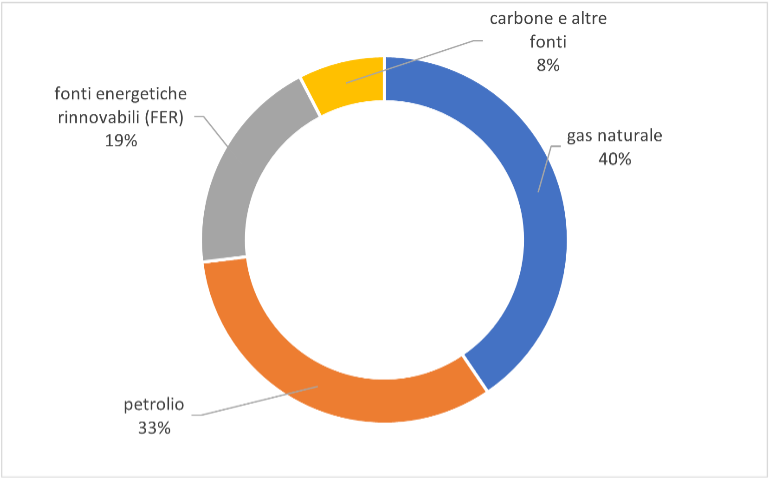 The geography of natural gas supplies has not undergone significant changes since the beginning of the Russian-Ukrainian conflict, and what has changed are the proportions of imports. In 2021, Italy imported 72.7 billion cubic meters of gas (about 40% of Italy’s energy needs), of which 9.8 billion cubic meters was in the form of liquefied natural gas. Until February 2022, that is, before the war, about 40% came from Russia, 31% from Algeria, 10% from Azerbaijan and Qatar, 4% from Libya (other small shares from Norway, the Netherlands, Croatia, Nigeria, the USA, France, Egypt and Spain).

The roles are falling today: Italy is closely linked to Algeria and Libya. If, for the latter, internal political instability has led to a decrease in flows, then Algeria has instead become our first supplier, distributing 20 billion cubic meters of gas to Italy, which according to the new agreements signed by the Draghi government with a contribution will increase the Ministry of Environmental Transformation led by Roberto Cingulani will increase by 3 billion by 2022 to reach 6 billion in 2023. Starting in 2024, Transmed should operate at full capacity with at least 9 billion cubic meters of gas. Azerbaijan will increase by 2.5 billion cubic meters of natural gas to reach an additional 9.5 billion via TAP, a gas pipeline that started last year, as a result of much controversy, but is currently partially providing us.

We made the biggest change in LNG import, which previously made up only a small part of the energy mix and is now approaching 20%. Most of the LNG comes from the United States because other countries in the world cannot produce and export it so quickly.

As for Russia, we have decreased from 40% to about 10-15% and this is a number that is also constantly decreasing given the recent developments between the closures and possible sabotage of the Nord Stream (the gas pipeline that connects the Baltic Sea to Western Europe).

For the rest, it will be necessary to understand whether the promises of the exporting countries will be fulfilled. Algeria is currently complying with the agreements by directing supplies stolen from Spain. On the other hand, the one who does not give guarantees to Italy is Norway, which will not be able to increase supplies quickly and, on the contrary, is currently in a state of structural decline.

With these arrangements we can hardly replace the 30% that Russia lost. If this will permanently close the taps, then the question becomes more problematic. At this stage, the three already active regasification devices will not be enough to meet the new needs, not to mention the possibility of providing for the construction of new gas pipelines bypassing Russia.

From a more optimistic perspective, it should also be considered that compared to 2009, not only Italy, but the entire European Union was able to prepare. When the gas crisis occurred 12 years ago, some Eastern European countries ran out of gas, which was supplied with resources originating from Russia and passing through Ukraine (about 80% of imports at that time). It was particularly harsh, despite the fact that other countries on the continent, such as the Netherlands and Germany, had ample stock but were unable to dispatch due to the structural limitations of the network. Since that time, internal conductors have been built through which gas exchange is better within the continent. This allows us, compared to the past, to send gas to areas where there is no stock. In addition, the reverse flowThat is, the possibility of sending gas from west to east after moving in the opposite direction for only fifty years.

See also  Surgery in Piedmont. History of the flag and the region

Now the EU is certainly better prepared in the event of supply bottlenecks and an imbalance between supply and demand because gas can flow a little more freely. In the short term, the Ministry of Environmental Transformation launched a national strategic plan. Moreover, Minister Singolani announced that last September 28, the target of 90% gas storage (equivalent to about 10.8 billion cubic meters) in advance was reached thanks to Snam and the support of Gse and Arera.

In all possible scenarios, consumption will necessarily be reduced. Even before the plan was implemented, the Italians had already saved about 5% due to expensive bills, but in order to survive the winter, it is necessary to reach at least 10% of the savings on consumption, required by the government plan. Under these conditions, also imagine the complete shutdown of Russia, all supplies from Norway will be transferred to the most needy Germany, depriving Italy of an additional pipeline. Therefore, in March 2023, almost zero stocks will be reached, which affects even strategic stocks, without taking into account the extreme scenario of a harsh winter. What is certain is that no matter how winter closes, with no Russian stockpiles and gas shut down across Europe, we will have to reverse course for the future and find a cure for our gas dependence.

We remind you that on Thursday, October 20, from 9:00 to 16:30, the conference dedicated to the topic of energy transition will be held at the University of Milan-Bicocca, organized by students of the MaCSIS Master in Communication of Science and Sustainable Innovation in collaboration with Scienza in rete. and Zadig. over here all information 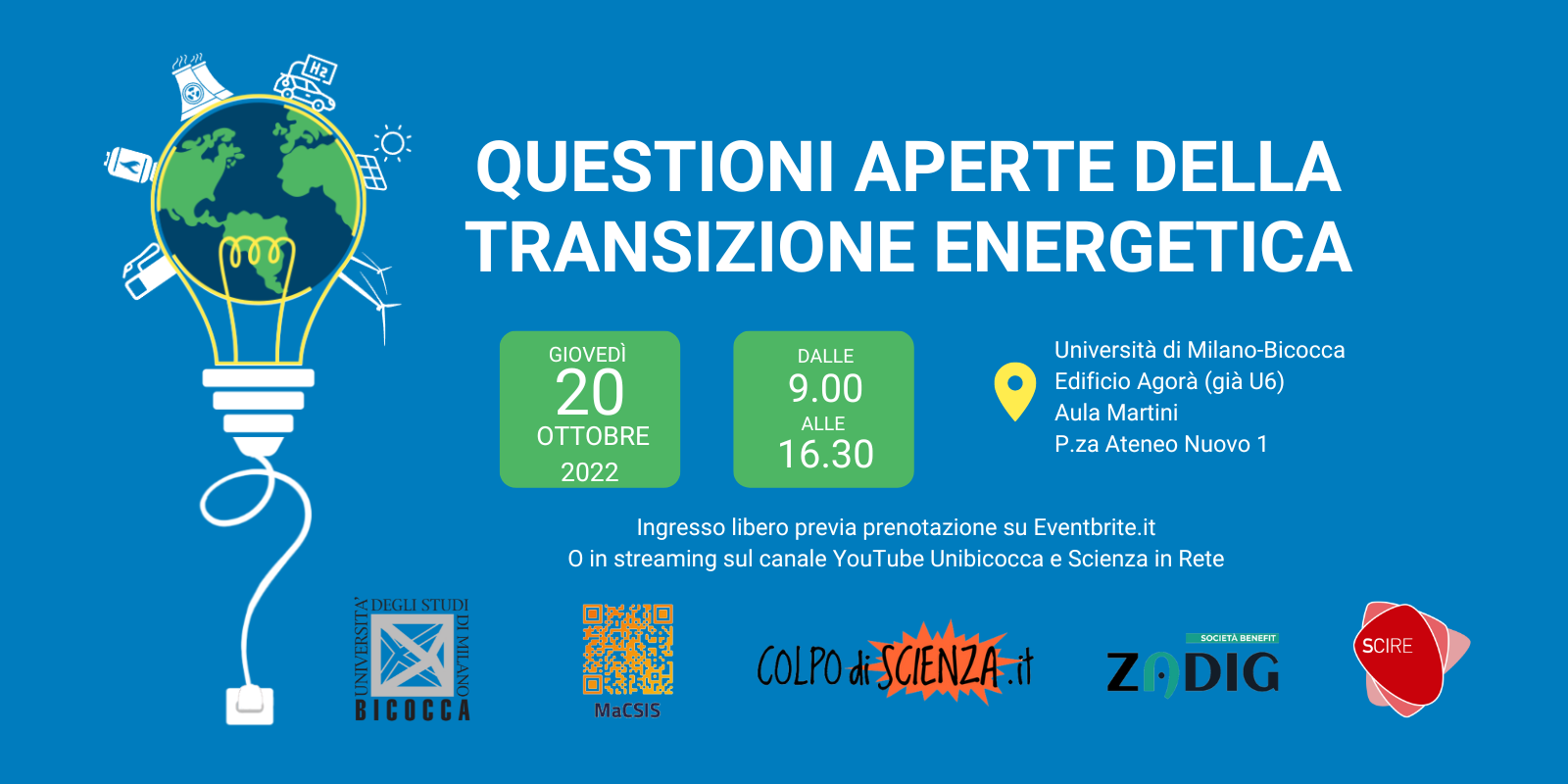